Things to do in Ruhengeri, Rwanda 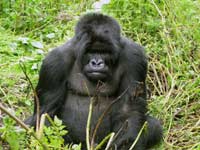 The main draw of Ruhengeri is the 130 square kilometre Volcanoes National Park, named after the five volcanoes of the Virunga Mountains found within its boundaries.

The park is best known as a haven for mountain gorillas, though it is also home to golden monkeys, buffalo and bushbuck.

There are seven bands of gorillas in the park, each containing between eight to forty-one members. Tourists can take a trek to observe the gorillas; the round trip takes between two and four hours, with tourists escorted by armed soldiers for safety reasons. Alternative trips to see golden monkeys are also available.

For those seeking more exertion, treks to top of the Karisimbi (4507m) and Bisoke (3711m) volcanoes are available.

The park also contains the grave of eminent primatologist Dian Fossey. Fossey, who lived and worked in Rwanda for 18 years, was murdered in 1985. She is the subject of the academy award nominated 1988 film Gorillas in the Mist, starring Sigourney Weaver.

when? All year round. Early booking is strongly recommended for the gorilla treks, as there are only 64 tickets per day.