Things to do in Toronto, CANADA

It is also the political capital of the province of Ontario. Located on the north shore of Lake Ontario, it is home to some 5 million people and is among the most multicultural communities in the world.

There are a host of things to do, ranging from being whisked to the top of the 550-metre CN Tower, to visiting Toronto's range of excellent arts and science museums, to shopping or catching a game. And then there is the great outdoors, with Waterfront and Toronto Islands closeby, and Niagara Falls a mere two hours away. Here are our top 8 attractions.

Things to do near Toronto 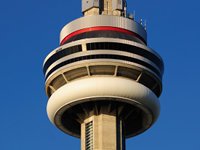 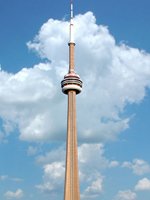 The CN Tower is Canada's most recognized landmark.

Soaring some 550m into the sky, it was the world's tallest tower for over 30 years and is classified as one of the seven wonders of modern times.

The CN Tower was completed in 1976, at a cost of C$63 million, surpassing Russia's Ostankino Tower as the world's tallest tower; that was an accolade it kept until 2010, when the 830 metre Burj Khalifa was completed. Glass elevators take visitors to the glass-floored observation deck at the 335m level, which provides a breathtaking bird’s eye view of the city of Toronto and miles around, while the revolving 360 Restaurant offers a fine dining experience. Visitors can also go up to the 447m level Sky Pod.

Higher still, the Tower’s 100m aerial has vital communications transmission functions for radio, television, microwave, and mobile systems. The Tower is fitted with 1330 LEDs which light the length of the tower from dusk until 2am each night; the colour scheme is changed to commemorate holidays and major events. During summer months thrill-seeking visitors can try the EdgeWalk—allowing them to walk around the roof of the 360 Restaurant. 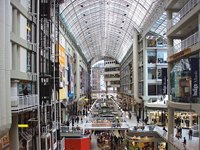 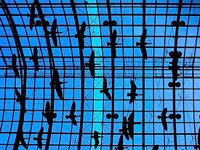 The huge, bright Toronto Eaton Centre extending over several blocks in the heart of the city is its primary shopping destination.

It is also an architectural gem, with a glass-domed galleria running the length of the four-level centre, modeled after Milan’s Galleria Vittorio Emanuele, with a large Canadian geese mobile hanging from the ceiling (pictured).

The 148,000 square metre Centre boasts tenants such as the Ryerson University Ted Rogers School of Management, the flagship store of the Hudson's Bay chain, and a 17-storey Marriott hotel. 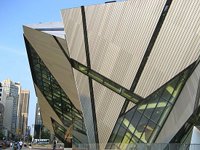 Dinosaurs, insects, bats, birds, and mammals all have stunning galleries, as do evolution, the formation of the earth, and the making of minerals.

World cultures start with the history of settlement of Canada, including its Aboriginal peoples. But the ROM’s 40 galleries also include a large collection of art and artefacts from China and the rest of Asia, as well as from ancient Egypt (mummies) and Greece. Among the ROM’s cutting-edge features are the many exhibits designed for hands-on and real-life experience, such as a fossil dig and replica clothing and armour.

Architecturally speaking, the ROM has recently expanded its exhibition space by 100,000 sq. ft. and modernized its appearance in the form of the Michael Lee-Chin crystal (pictured). It is a controversial and jarring angular glass structure that protrudes from the north side of the building designed by famous architect Daniel Libeskind.

4. The Art Gallery of Ontario 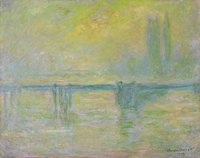 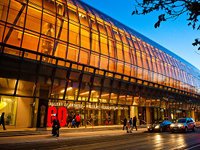 Supplemented by exciting temporary exhibitions, the Art Gallery of Ontario (AGO) houses a permanent collection of nearly 80,000 works of art, one of the largest in Canada.

It is most famous for its extensive collection of Canadian works, including Inuit, the Group of Seven, and related painters—early Quebecois  painters, Cornelius Krieghoff, Tom Thomson, and Emily Carr.

It also contains European masterpieces, including works by Cezanne (his 1885 Interior of a Forest), van Dyck, Renoir and Monet (whose Charing Cross Bridge is pictured).

AGO also holds a substantial collection of large bronze works by British sculptor Henry Moore, and more than 40,000 photographs. A celebrated new design to the building by architect Frank Gehry was completed in 2008. 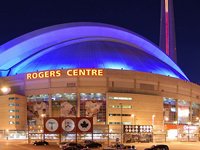 Formerly known as SkyDome, the Rogers Centre is a massive multi-purpose stadium whose principal tenant is the Toronto Blue Jays baseball team.

Besides baseball, football, and other sporting contests, for which it holds some 46,000 seats, the Centre hosts rock and pop concerts and conventions. It was the first stadium to have a fully retractable motorized roof which can be opened or closed in 20 minutes (pictured). It also has one of the largest and most sophisticated videoboards in the world. Tours of the Rogers Centre are available between scheduled events.

where? One Blue Jays Way (at Front Street), adjacent to the CN Tower. Tel: 416-341-000. Closest subway stations: Union Station (connected by the SkyWalk) or St. Andrews; Streetcar: King Street - 504 (get off at Peter or John Street) or Spadina Avenue – 510 (get off at Bremner Boulevard).

when? The tour schedule varies from day to day. 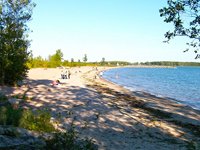 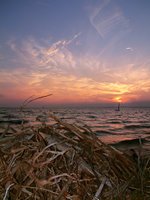 The Toronto waterfront, along the southern edge of the city, is a lively area, with a long stretch of boardwalk, buskers and other sidewalk entertainment, harbour cruises, the Harbourfront centre (with unusual gifts, arts and cultural events, galleries, and fine dining), the CN Tower and the Rogers Centre.

The charming, peaceful, picturesque Toronto Islands can be reached by a short ferry ride from the waterfront. They provide a relaxing ambiance for family picnics, pedestrian and bicycle trails, beaches, swimming, boating, and an amusement park, as well as a spectacular view of the Toronto skyline.

To the west is Ontario Place, a comprehensive entertainment and recreation complex located on three man-made islands off the Lake Ontario waterfront. It contains rides, pedal boats, waterslides, beach volleyball, a marina, an IMAX theatre, the Cinesphere, the large open-air Molson Amphiteatre which features topflight musical artists, and many other entertainment attractions and amusements.

where? Boardwalk: along the lakeshore between Bay and Spadina; take streetcar 509 or 510 from inside Union Station and get off at Harbourfront. Toronto Islands: take the ferry from the foot of Bay Street (at Queens Quay). Ontario Place: 955 Lake Shore Blvd. West, Email: info@ontarioplace.com. Closest subway station: Bathurst, then take Bathurst 511 streetcar to Exhibition Place. From Union Station, take Harbourfront 509 streetcar to Exhibition Place. From Wilson or Dufferin Station, take Dufferin 29 Bus. GO Train: get off at Exhibition Place stop.

when? Except for Harbourfront, these are primarily summertime attractions. Phone ahead for other opening times. 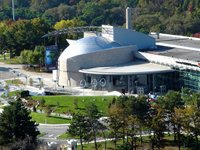 The Ontario Science Centre is located about 10 km from downtown, but well worth the trip.

It was a pioneer in the hands-on approach to exhibits and continues to present the most recent breakthroughs in science in entertaining ways. Appealing to all ages, it has exciting interactive exhibits regarding the human body (including human specimens), the human brain (including senses, memory, and communication), space travel (a planetarium, rockets, clouds, and moon rocks), the living earth (including nature walks), and an IMAX theatre.

when? Open daily from 10 am to 5 pm; closed Christmas Day.

8. Out of town: Niagara Falls 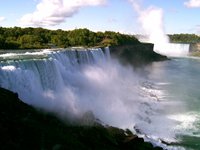 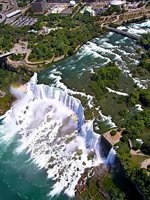 Niagara Falls is probably the top tourist destination in all of Canada and thus a mandatory day-trip for visitors to Toronto.

The thundering falls are among the most spectacular in the world. They can be viewed free by walking along the adjacent street, but they may also be seen from other vantage points: from below on Maid of the Mist and other boat tours; from two towers hovering over the falls; by cable car above the falls; or by tunnels behind the falls.

The City of Niagara Falls also hosts casinos and every imaginable tourist attraction. Moreover, the Niagara region is famous for its wine, and visitors can drop into wineries along the route from Toronto, while the nearby picturesque town of Niagara-on-the-Lake houses the Shaw Festival, one of Canada’s celebrated summer theatres.

where? Niagara Falls is a two-hour drive from Toronto, whether by car (the Queen Elizabeth Way) or by tour bus. Day-tours to Niagara Falls are offered by such companies as Toronto Tours and Gray Line.

when? Year-round; tours depart Toronto in the morning and return in the evening.

£$€¥ Bus tour prices vary depending on what attractions are included.