Things to do in Seville, SPAIN

Found at the bottom of Spain, and close to the Atlantic ocean, the city has been fought over for centuries. This explains the part-Islamic, part-Christian components of one of its principal attractions, the Cathedral (whose main belltower is a converted minaret). Seville's other attractions include the Alcazar and Plaza de Espana. The city is also a hotbed of flamenco music and dance.

Things to do near Seville 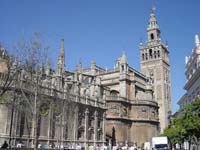 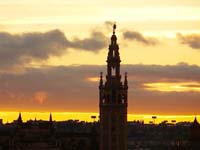 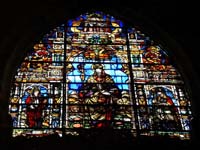 Consecrated in 1507, the Seville Cathedral is the largest Gothic cathedral—and third largest church—in the world.

The Cathedral's dimensions are as follows: 443 feet in length, 330 feet in width and 130 feet in height. It was designated a UNESCO world heritage site in 1987 and is famous for housing the remains Christopher Columbus (transferred here from Havana in 1902).

Built on the site of a grand Almohad Mosque, the Cathedral was constructed to demonstrate Seville's power and wealth after the Reconquista.

The cathedral's 344 foot high bell tower is its most striking external feature. Known as the Giralda, the tower is a converted minaret built in 1196. It is particularly known for its brick trelliswork, arched windows and niches, and Renaissance spire.

Other notable features include the Cathedral's 80 chapels, its Sacrista Mayor dome, its lavishly decorated central nave and its large intricately carved altarpiece. 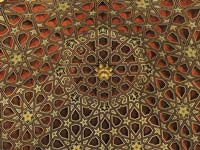 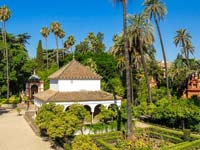 The Alcazar of Seville (aka the Royal Alcazar or the Reales Alcázares de Sevilla) is a Moorish fort in Seville which is still used as a royal palace.

The first Alcazar was built by Abd Al-Rahman III, the first Caliph of Andalucia, in 913. Since then the Alcazar has been extensively modified and expanded by subsequent rulers, resulting in an eclectic mix of Baroque, Moorish, Islamic and Neo-Classical architecture.

The Alcazar's jewels include the Courtyard of the Maidens, with rectangular reflecting pool and sunken gardens, from which lead a number of lavish reception rooms. Featured in the Kingdom of Heaven, visitors remark on the elaborate carvings, bright tiles and mosaics (pictured), and intricate tapestries.

The Alcazar is also famous for its extensive formal gardens, complete with palms, topiary, pools, fountains, pavilions, follies and a popular cafe. Many tourists rate the Alcazar on a par with Grenada's Alhambra (though warn that the palace can get very busy during the mornings). 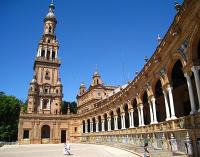 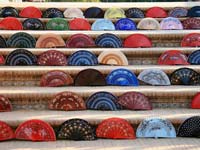 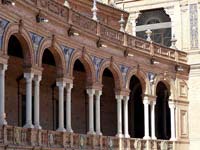 Designed by Anibal Gonzalez and built in 1928 for the 1929 Ibero-American Exhibition, the Plaza de Espana is a large public space situated in the Maria Luisa Park.

The semi-circular plaza has a large fountain at its centre, which is surrounded by a D-shaped moat with a diameter of 200 metres used for boating and crossed by intricately decorated bridges.

The moat is itself bordered by a crescent-shaped facade (pictured), which now houses Seville's municipal offices and is flanked by two 80 metre-tall towers. The brightly coloured alcoves, arranged into alphabetical order, each represent a different Spanish province.

Scenes from Lawrence of Arabia and Star Wars Episode II were filmed on the Plaza. The Plaza leads out to the rectangular Maria Lusia Park, which is half a mile long and contains fountains, walls, pools, ponds, statues, converted mansions and lush flora.

where? A few hundred metres to the south of the Cathedral and Alcazar, in Central Seville.

when? All year round.