Things to do in New York, USA

New York is home to 8.3 million people and is the world's financial and cultural capital.

It boasts the planet's most famous skyline (with 50 Skyscrapers of over 200 metres), iconic structures such as the Empire State Building, the Statue of Liberty and Brooklyn Bridge, many of the world's best museums (think the Metropolitan Museum of Art, MoMA, the Guggenheim), incomparable shopping (at the likes of Barney's, Bloomingdale's, Macy's, Saks ...), the Broadway stage, the Headquarters of the United Nations, scores of five star hotels, 42 Michelin-starred restaurants, top-rated sports teams, and its legendary buzz.

where? Manhattan, New York's central area, is a 21 x 4 kilometre peninsular surrounded by the Hudson and East Rivers. Most visitors arrive by plane to Newark, La Guardia and JFK Airports (c. 30-60 minutes from the centre of Manhattan by cab). Central Park (around which many of New York's museums are clustered) dominates Manhattan's upper side, underneath which is found the Theatre District and Times Square. Further south is the peaceful Greenwich Village, with the Lower Manhattan skyscraper district, Wall Street financial district and Brooklyn Bridge furthest south. Off the tip of the peninsular are found Liberty and Ellis Islands.

when? The Big Apple gets very hot in summer and bitterly cold in winter, making April-early June and September-November the best times to visit.

£$€¥ New York's many delights come with a hefty price tag! Expect to pay $250+ per night for a modest hotel room close to Times Square, $40+ per head for a sit-down mean, and at least $100 per ticket for a popular show. Public transport and taxis are fairly affordable. Some museums (such as the Metropolitan Museum of Art) do not levy an entrance fee. Don't forget that sales tax of up to 15% is added to many clothes and food purchases.

Things to do near New York

1. The Metropolitan Museum of Art 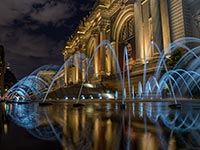 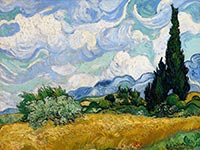 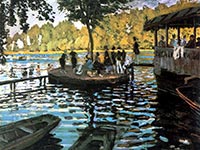 The Metropolitan Museum of Art can legitimately claim to be the most complete museum in the world.

It has a permanent collection of more than two million works, dating from prehistoric times to the present, and divided into 22 departments. Founded in 1870, and situated on the eastern edge of Central Park, the Museum attracts 5.2 million visitors a year.

The Museum has a number of eateries, including the recommended Petrie Court Cafe on the ground floor.

As many days would be required to explore all the Museum has to offer, many choose to focus on one or two departments or take one of the self-guided tours recommended on the Museum's website.

The 443-metre high Empire State Building was completed in 1931, after a period of construction of just 410 days.

It was officially opened by President Hoover, when he turned on its lights by pushing a button in Washington. The Building has a memorable arc deco design, 102 floors, 1860 steps, and is currently the tallest structure in New York. As might be expected, the Building offers the best vantage point in the city.

Visitors can buy tickets to the observation decks on the 86th and 102nd floors. But be warned: the ticket and elevator queues are almost as legendery as the building!

An alternative, less busy, vantage point is the Top of the Rocks attraction at the Rockefeller Centre. Famous for its art deco design, annual Christmas ice-rink and tree and as the home of NBC's studios, the Rockefeller's observation deck is on its 67-70th floors and offers panoramic views of the city from the heart of midtown Manhattan.

where? The Empire State Building is at 350 Fifth Avenue, between 33rd and 34th Streets, in midtown Manhattan. The Rockefeller Centre is found at 47th to 50th Streets.

when? The Empire State Building is open from 8 am to 2 am, seven days a week (last elevators at 1.15 am), 365 days a year. The Rockerfeller Centre is open 8am to midnight (last elevators 11pm).

At 843 acres, Central Park is the largest metropolitan park in New York.

Situated in the heart of Manhattan, the Park is bordered on all sides by expensive real estate (and numerous skyscrapers). It attracts over 25 million visitors a year. The Park contains: lakes, ponds and a reservoir (with an encircling 3 kilometre running track); various walking tracks, bridle paths and woods; two ice-skating rinks (one of which is used as a swimming pool in high summer); a wildlife sanctuary and Zoo; and various sporting facilities. Highlights of Central Park's Zoo are sealions (who put on impressive performances at feeding time), snow leopards, red pandas, penguins and polar bears; a smaller adjacent Children's Zoo allows children to get close to goats, sheep, alpacas, cows and pot-bellied pigs. The Park hosts numerous cultural events every summer, including concerts by the New York Philharmonic and the Metropolitan Opera, and performances of plays by Shakespeare and others. A great place to unwind after a few days in the city.

where? The Park stretches from Central Park South (59th St.) to 110th St. at the northern end and from 5th Ave. on the east to Central Park West (8th Ave.) on the west.

4. The Statue of Liberty

The iconic Statue of Liberty, presented by the people of France in 1876 to mark the centenary of the Declaration of Independence, is located on the 12-acre Liberty Island.

Accessed by a short ferry ride, the Statue was designed by French sculptor Frederic-Auguste Bartholdi and is made from a steel skeleton engineered by Gustav Eiffel (who later designed Paris' eponymous tower). It is clad in copper, with gold-leaf covering the flame of its famous torch; the seven rays of the Statue's crown represent the seven seas and continents. It stands 93 metres tall and weighs 204 tonnes. Visitors can go to the top of the Statue's pedestal or climb the 365 steps to the Crown of the Statue (this climb is strenuous and only a very limited number of tickets are available). Also located in the Statue's pedestal is a museum exhibit about the Statue.

where? Liberty Island, New York Harbour (accessible by ferry only). Ferries are operated by Statue Cruises and leave from the Battery Park ferry terminal. Tickets are sold at the Castle Clinton National Monument (next to Battery Park). Subways: #1 train to South Ferry, #4 or #5 to Bowling Green, R or W train to Whitehall Street. Buses: M1, M6, or M15 to Battery Park.

5. The American Museum of National History 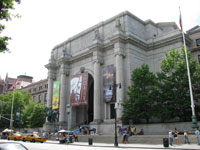 Founded in 1869, the American Museum of National History has a collection of over 150 million specimens, many of which are dsplayed in its 46 permanent exhibition halls.

Its most impressive exhibits include: the Hall of Human Origins (which traces the story of evolution, displaying the important 3.2 million year old 'Lucy' skeleton); the Gem and Mineral Halls (which exhibits the 632 carat Patricia Emerald, the 563 carat sapphire known as the Star of India, and the largest cut stone in the world); the Hall of Meteorites (which holds a 34 tonne section of the Cape York meteorite); and the numerous fossil halls (which display a Tyrannosaurus rex composed of real bones from two skeletons, and a giant Brontosaurus skeleton). Annexed to the Museum is the architecurally stunning Rose Center for Earth and Space, which houses the Museum's planitarium.

6. The Museum of Modern Art (MoMA) 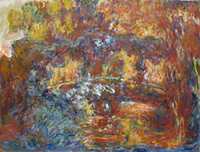 Dedicated to modern art from the 19th Century onwards, the museum displays its collection in a 59,000 square metre granite and glass building designed by Japanese architect Yoshio Taniguchi and opened in late 2004. MoMA's treasures include: Cézanne's The Bather; Dalí's The Persistence of Memory; Matisse's The Dance; Monet's Polar's at Giverny and waterlillies; various Picasso nudes; Pollock's Number 31, 1950; Rousseau's The Sleeping Gypsy; van Gogh's The Starry Night; and Warhol's Campbell's Soup Cans. Regarded by many as the world's pre-eminent modern art museum, MoMA also has two café's and a Michelin-starred fine-dining restaurant.

8. Shopping on Fifth and Madison Avenues

Fifth Avenue, to the east of Central Park, runs from Greenwich to the heart of Midtown.

Its central section, regularly rated as one of the most expensive pieces of real estate in the world, is famous for its high-end shops and museums. The shopping (generally between 34th and 60th Street) includes Tiffany, Cartier, Gucci, Louis Vuitton, Prada, Armani, Versace, van Cleff & Arples and de Beers. The museums (found between streets 80 to 100, aka 'museum mile') include the Met and the Guggenheim Museum (not to mention the Empire State Building, the NY Public Library, the Rockefeller Centre and St Patrick's Cathedral). Next door, Madison Avenue boasts a similarly impressive list of flagship stores, including Hermès, Chanel, Asprey, YSL, Dolce & Gabbana, Vera Wang, Dior, Graff and Ralph Lauren.

Staten Island is one of New York's five boroughs. The best way to get there from Manhattan is by taking the Staten Island Ferry.

The Ferry, which now only transports pedestrians and cyclists, takes about 22 minutes to reach its destination. But the views are fantastic. As you pull out of the Manhattan ferry terminal, you will be able to see Ellis Island and the Statue of Liberty on your right, and the Governor's Island and Long Island on your left. The New York skyline (to the back of the boat) will come into view after a few minutes, as will the bridges of lower Manhattan. As if that were not enough, the whole experience won't cost you a dime: the ferry, operated by the New York City Department of Transportation, has been free since 1997. www.siferry.com

when? Ferries sail round-the-clock, at least every 30 minutes. Ferries run every 15 or 20 minutes during busy periods. 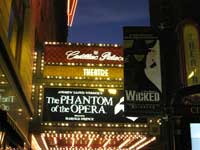 New York has about 40 theatres with a capacity exceeding 500 seats, which collectively grossed close to $1.36 billion over the 2014-15 season.

Along with London's west-end, Broadway represents the highest level of commercial theatre in the English speaking world. Shows playing at the moment include: The Book of Mormon, One Man Two Guvnors, Memphis, War Horse, Wicked, The Phantom of the Opera (which, at the Majestic Theatre, is on a run exceeding 9000 shows), Mamma Mia, Chicago, Jersey Boys, West Side Story and Mary Poppins. So why not get dressed up, pop out for a quick pre-theatre meal, and then sit back and enjoy the magic of the stage.

where? Various theatres located on or around Broadway.

when? Matinees usually start at 2 or 3 pm (normally Wed, Sat and Sun), and evening performances at 7 or 8 pm (normally Tues to Sat).

Escape the hubbub of downtown by taking a visit to Greenwich Village, a largely residential area on the west side of Lower Manhattan.

Located close to Washington Square Park and New York University, and with a haphazard street layout, the Village was originally the Bohemian capital of the US (and the birthplace of the beat movement). Now home to upper middle class families, the Village is known for its good non-chain restaurants, coffee shops and bars; its street entertainers, musicians, and chess players; the attractive Jefferson Market Courthouse; the 4th Street Basketball Court (where you can see some of the best street players); several pretty parks and squares; and, above all, the vibe. The Village was the setting for the sitcom Friends. A recommended smaller attraction is the Merchant's House Museum, a Greek revival townhouse maintained as a monument to the wealthy merchant family who occupied it for most of the 19th century.

when? All year round, but especially during the afternoons and evenings.