Things to do in Lisbon, PORTUGAL

The Castle of St George

Home to half a million, Lisbon is a much underrated tourist destination.

With a history dating back to before Roman times, Lisbon has its fair share of landmark destinations. They include the Castelo de Sao Jorge, overlooking the capital and offering great views of its terracotta roofs and harbour, the Monastery of St Jerome and the Belem Tower.

Culture is catered for by impressive museums such as the Gulbenkian. The city is packed with wonderful independent cafes, bars and restaurants (don't miss the traditional custard tarts called Pasteis de Nata). You can get away from the city centre by visiting the many Atlantic beaches or the mountainous Sintra. And Lisbon has the mildest winter of any European city, and a six-month summer period (with average highs of more than 20 degrees Celsius between May and October).

Things to do near Lisbon 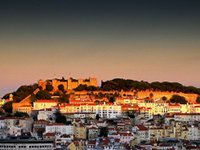 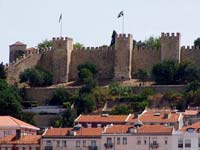 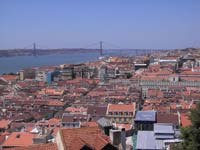 The Castle of St George (Castelo de Sao Jorge) is a medieval Moorish castle perched on a hilltop and looking down to the historic centre of Lisbon, Lisbon's harbour and the Tagus River.

There has been a structure where the Castle now stands since the second century BC, with the oldest remaining elements installed by the Romans in the first millennium and the Moors in the 11th century.

Extensive renovations took place in 1300 AD, and later, between 1373-5, a great 5.4 kilometre defensive wall was added around the castle and much of Lisbon, together with 77 towers.

King Alfonso Henriques of Portugal captured the castle from the Moors in 1147.  It was thereafter renamed St George’s Castle, in honour of England’s patron saint and in deference to an Anglo-Poruguese pact of 1371. Then, in 1498, King Manuel I welcomed Vasco da Garma to the Castle after his successful first voyage to India.

Visitors can explore the square castle (climbing the 11 remaining towers, in particular the Tower of the Keep and Ulysses Tower, and walking along the walls and other fortifications), the adjacent ruins of the royal palace (severely damaged in Lisbon’s 1755 earthquake), and the tranquil surrounding gardens. 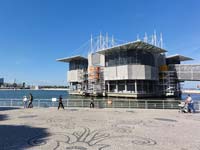 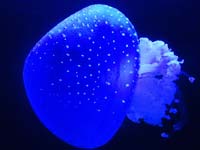 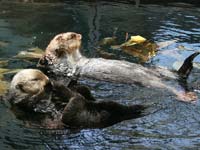 The Lisbon Oceanarium, opened in 1998, was the centrepiece of the world exhibition hosted by Lisbon that year.

It is one of Lisbon’s most popular tourist attractions, attracting over one million visitors annually. The Oceanarium’s modern building (sometimes likened to an aircraft carrier) holds five tanks, the ‘Global Ocean’ tank, and four smaller surrounding tanks which recreate the North Atlantic, the Temperate Pacific and the Tropical Indian oceans and the Antarctic. 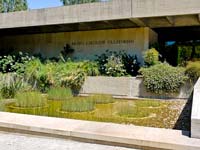 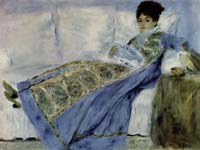 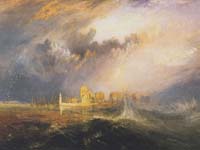 At any time, the Museum displays about 1,000 artefacts that are representative of the whole. The Museum's first ‘circuit’ contains Oriental and Classical Art pieces. The most noteworthy include Head of Senusret III, various coins from ancient Greece, and beautiful Islamic pottery and tapestries.

The second 'circuit' is devoted to European Art, and contains pieces dating from the 11th to the mid-20th century. They include Liège's Virgin and Child, Rodin's Burgher of Calais, Ruben's Portrait of Helena Fourment, Guardi's The Feast of Ascension in the Piazza San Marco, Edouard Manet's Boy Blowing Bubbles, Renoir's Portrait of Madame Monet reading Le Figaro (pictured), and Monet's Still life with melon.

£$€¥ €7 for adults to see the permanent and temporary exhibitions. 50% discount for children and seniors. 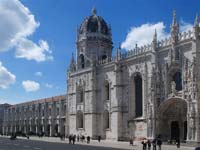 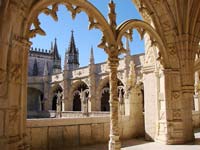 The Monastery of St Jerome, located in Lisbon’s Belém district, is famous for its fine Manueline architecture (with its Gothic and Moorish influences) and was awarded World Heritage status in 1983 alongside the nearby Tower of Belém.

Construction on the Monastery (aka the Hieronymites Monastery and Mosteiro dos Jerónimos) started in 1501, to give thanks for Vasco de Gama's successful voyage to India, and was completed a century later. It was funded by a 5% tax levied by King Manuel on imports from Africa and the Orient.

With no funding difficulties, the Monastery was built in an ornate style using locally sourced gold-coloured sandstone. This style is typified by intricate carvings (often with a nautical theme) and numerous gables and pinnacles. Of particular interest are the Monastery's three-aisled, five-bayed, church; its vast two-storied cloister; and Vasco de Gama's tomb.

The Hieronymite order of monks were the first to inhabit the Monastery; their job was to pray for the King's eternal soul and to provide assistance to sailors who departed from Lisbon to discover the world.

The Monastery retains its importance today: in recent years it has hosted an exhibition of da Vinci paintings, and was the place at which the European Union's Treaty of Lisbon was signed in December 2007. 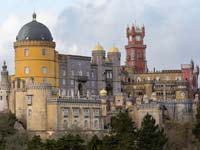 The village of Sintra, located 30 minutes from central Lisbon, was once described by Lord Byron as the "most beautiful in the world".

Now a world heritage site, the village and its surroundings boast a host of attractions. The Pena National Palace, standing on the Serra de Sintra above Sintra, was built in the 19th century and is of Romanticist design. It is painted in distinctive red, yellow and gray tones and can be seen from Lisbon on a clear day.

It is an eclectic mix of drawbridges, towers, ramparts, domes and gargoyles, with the inside offering elaborately furnished state rooms. The Palace is surrounded by the Pena Park, 200 acres of diverse flora including the North American Sequoia, Chinese Ginkgo and Japanese Cryptomeria.

The Sintra National Palace, located in the centre of Sintra, is the best-preserved medieval royal palace in Portugal. It was inhabited by the royal family between the 15th and 19th centuries. It has two distinctive conical chimneys and a number of state-rooms decorated with elaborate frescos and brightly coloured glazed tiles.

The Quinta da Regaleira (also known as the Palace of Monteiro the Millionaire) is a romantic five-floor gothic palace, complete with chapel and surrounded by a park containing lakes, tunnels, grottos, fountains and wells. Sintra's other attractions include the Monserrate Palace, the Seteais Palace and the Castle of the Moors (pictured)..

where? Sintra is best reached by train. The journey takes about 40 minutes from the Rossio station in central Lisbon. Sintra can also be reached by car, a 30-minute drive on the IC19 highway, though parking is scarce so this is not recommended. The Moorish Castle and Pena National Palace are best accessed by bus 434, leaving every 30 minutes from behind Sintra's train station.

when? All year round, though a clear day is preferable.

£$€¥ Most attractions charge an admission fee of between €3 and €7. 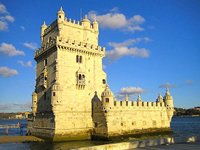 The Belem Tower (aka Tower of St Vincent and Torre de Belem) was commissioned by King John II in 1515 and completed in 1519.

Located on the north bank of the Tagus River, it comprises a limestone structure complete with four-storey, 100-foot tall, tower offering great views of many of Lisbon’s landmarks.

The exterior of the Tower is decorated with intricate arches, turrets and carvings of angels, coats of arms and even a rhinoceros. Another carving, Our Lady of Safe Homecoming, said to protect sailors, faces the river. Other features are more utilitarian: the tower was built as part of a defensive system to protect the Tagus estuary, and so is equipped with drawbridge and 17 long-range cannons.

Inside, the Tower contains the mandatory dungeon, the lodgings for the Tower’s Governor (an important position in the middle ages), the well-preserved King’s Room leading to a stunning balcony, the Audience Room and Chapel (complete with holes in the floor which permitted projectiles to be dropped on attackers).

Opened in 1966, the bridge comprises six car lanes on its upper deck, with two train tracks below.  It carries over 150,000 cars and 157 trains per day and has a longest span of just over one kilometre.  Its towers have a maximum height of 190 metres, and the structure contains almost 55,000 kilometres of steel wire.

It was renamed the 23 de April Bridge in honour of Portugal’s 1974 Carnation Revolution (a bloodless military coup which overthrew the Estado Novo regime and ultimately led to Portugal’s withdrawal from its African colonies).  The bridge features in the 1969 Bond film On Her Majesty’s Secret Service.

where? You can drive over the bridge, or take a train to Pragal. Alternatively, the bridge can be viewed from Doca de Santo Amaro (Saint Amaro Docks), which also offers trendy bars and good restaurants in a pretty setting.