Things to do in Calgary, CANADA

Calgary is a dynamic, burgeoning city situated in the Alberta foothills, looking eastward to the prairies with the majestic Rocky Mountains only an hour away to the west.

It is the executive centre of the flourishing Canadian petroleum industry, while at the same time celebrating links to its Western heritage.

Sometimes called "cow-town" or "Stampede City," it is the home of the famous Calgary Stampede. The city now boasts a population of over one million people, as new subdivisions multiply relentlessly along its boundaries and new skyscrapers compete to dominate its downtown. It has sunny weather and a sunny, clean, friendly, and prosperous disposition.

We describe the best things to do in Calgary below, ranging from the adrenaline of the Stampede and excitement of Spruce Meadows horseracing track, to the natural beauty of the Rockies and Prince's Island, to attractions such as the Calgary Zoo, Canada Olympic Park and Glenbow Museum.

Things to do near Calgary 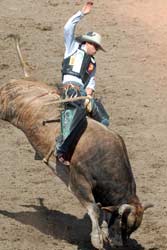 Widely regarded as "the greatest outdoor show on earth," the 10-day city-wide Calgary Stampede in early July is not to be missed.

The whole community reverts to its Western roots and embraces the party spirit, as residents and visitors alike don cowboy and cowgirl outfits, flock to the parade, the rodeo events, including the famous chuckwagon races, the midway, the livestock competitions, exhibitions of every kind, the star-studded country music shows, the Indian Village, the restaurants and bars, and the many free family activities located throughout the city.

If one is looking for fun and excitement, Stampede Week is the best time to visit Calgary, but if such scheduling is not possible, there are many reasons to experience the city at any other part of year.

where? Stampede activities take place all over the city, such as daily square dancing, Western music, and pancake breakfasts served out of chuckwagons in various downtown and shopping mall locations. Much of the action also takes place in various bars. The Stampede grounds themselves are located downtown, on Macleod Trail between 12th and 25th Avenues S.E. They are most accessible by the C-Train (light rail transit) with stops at Victoria Park/Stampede and Erlton/Stampede, although limited parking is also available. Tel: 403-261-0101 or 1-800-661-1260.

when? Ten days in early July; 2013 marks its 101st anniversary of the Calgary Stampede, from July 5 to 14. The Stampede grounds, as such, are open from 11 am to midnight.

£$€¥ Much of the Stampede action is free, such as the Friday morning parade, the daily square dancing at many locations, Western music, pancake breakfasts, and neighbourhood barbecues. Admission to the Stampede grounds where one finds the rodeo events, the midway, the Indian Village, many free exhibits, and much free entertainment once inside: Adults: $15; Children (7-12) and Seniors: $8. Tickets for the afternoon rodeo show start at $36 and for the evening chuckwagon races, stage show, and fireworks at $52. 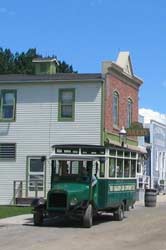 It consists of 180 historical exhibits including preserved pioneer buildings - stores, barns, offices, houses, etc., a variety of pioneer activities, such as baking, blacksmithing, ice-cream making, and guides dressed in period costume, all of which provide a hands-on experience of the Canadian western heritage. The Park features an authentic steam train, a paddlewheeler boat on the Glenmore Reservoir, an antique Ferris wheel, and a horse-drawn wagon. The new Heritage Town Square recreates the period up to 1950 and includes the Gasoline Alley Museum of antique cars.

when? Open daily from 9 am to 5 pm from May 17 to Labour Day and from 10 am to 5 pm on weekends until Canadian Thanksgiving (about Oct. 10). The Heritage Town Square and Gasoline Alley Museum are open year-round. 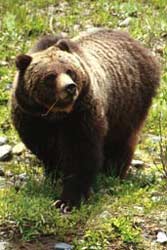 The Calgary Zoo is the second largest in the country, allowing visitors close observation of over 1000 animals living in their natural habitats.

The main sections of the zoo, each replicating entire ecosystems, are Africa (hippos, giraffes, zebras), Canadian Wilds (grizzly bears, moose, bison, wolves), Australia (kangaroos, wallabies), Eurasia (tigers, snow leopards), and South America (spider monkeys, giant anteaters, two-toed sloths). Scheduled daily visitor programs, including “meet a keeper” are featured, and the whole Zoo doubles as a Botanical Garden, with an indoor conservatory and plants matching animals throughout the various geographical regions of the park. The Zoo also contains a Prehistoric Park in which visitors get to feel part of western Canada millions of years ago as they encounter life-size models of dinosaurs. 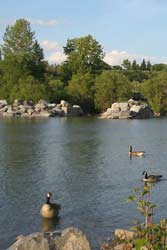 Prince's Island is an urban park, a beautiful oasis of peace and quiet in the midst of all the skyscrapers and bustle of downtown Calgary.

Part of the pathway system along the Bow River, the Park is linked by bridges, mostly footbridges, to the Eau Claire Market, with its many shops, restaurants, and IMAX theatre, and to downtown, as well as by a bridge to the north. Part of the Park is landscaped and part features a wetland environment inhabited by geese and ducks. It is regularly used by football and frisbee tossers, and for jogging, strolling, and family picnics. The Park is also the site of most of Calgary's festivals, such as Shakespeare in the Park and the Calgary Folk Music Festival.

when? The park is at its best during the summer; the Eau Claire Market is open daily from 10 am to 6 pm (Sunday noon-4 pm). 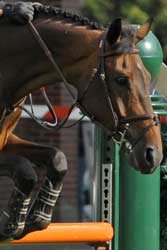 Situated on the southwestern edge of Calgary, Spruce Meadows aims to be the leading venue in the world for international horse sports and the foremost horse jumping facility in Canada.

Its five main tournaments in the summer feature the best show jumping athletes and horses from throughout the world as they compete for top prize money and international prowess. Spruce Meadows is also an exciting attraction to visit at other times: it holds indoor show jumping in the spring, and welcomes visitors throughout the year to tour the beautiful grounds and the stable areas, to watch trainers exercise their horses, to meet the new-born foals in the spring, and to picnic and fish in a clean, green, hospitable environment.

when? Open year-round, from 9 am to 6 pm to tour the grounds and stable areas. Indoor show jumping competitions take place in the spring, and the five major international equestrian competitions in June, July, and September.

£$€¥ Free admission to the grounds. Rush seating for all events: $5; price of reserved seating for tournaments varies. 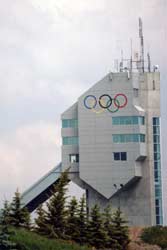 Canada Olympic Park began as the most prominent venue of the Olympic Winter Games held in Calgary in 1988 and continues to serve as a competition, training, and recreation area for the use of both athletes and the general public.

The facility allows visitors to ski, bobsled, engage in other recreational opportunities, or simply tour the many aspects of the Park. It provides lessons for skating, skiing, ski jumping, snowboarding, and other winter sports for people of all ages and abilities, and it is the site of world-class training programs and competitions for elite-level athletes. The 1,500 metre Olympic Track continues to host World Cup competitions for bobsled, luge, and skeleton events; the Ski Jumping training complex is used throughout the year (on plastic in the summer!); and the Park also features a Freestyle Aerials and Moguls course. Its most recent additions include a mountain bike park, a 500 metre zipline from the top of the ski jump tower, a mini golf course, and a public skating program. The Park also houses the Olympic Hall of Fame and Museum with a huge collection of memorabilia from the 1988 Olympics and other Olympic games. 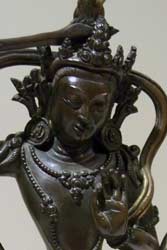 The Glenbow Museum is "where the world meets the West."

It is one of Canada's largest museums, specializing in the preservation of the western Canadian heritage and culture - Aboriginal peoples, frontier exploration, and later development. But it also houses a vast collection of art and artifacts from around the world. It is a combination of museum, art gallery, library, and archives, including over a million artifacts and some 28,000 works of art. In addition to its permanent exhibitions and programs, the Museum features unique travelling exhibitions. Those interested in the Glenbow Museum should also visit Fort Calgary, the reconstructed fort established in 1875 by the North West Mounted Police. It provides a fascinating and interactive portrait of the founding of the city, including the interaction among NWMP, Aboriginal peoples, and new settlers. info@fortcalgary.com.

8. Out of town: Canadian Rockies 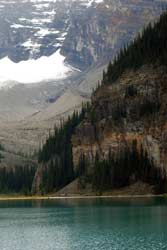 The majestic Rocky Mountains provide a spectacular background to the city of Calgary and begin an hour away.

Gatineau boasts phenomenal views of the Outaouais valley, with gorgeous trees (especially in the fall) and clear lakes set against the background of the Gatineau Hills.

Visitors may drive to and through the Rockies or opt for one of many organized bus tours. Besides breathtaking scenery and exciting wildlife, the Rockies offer hiking, scrambling, and mountain climbing, camping, swimming in hot springs pools, skiing, horseback riding, boating, golfing, and the cultural gem of the Banff Centre, with its year-round events and performances culminating in the Banff Summer Arts Festival.

where? West of Calgary on the Trans-Canada Highway, starting with the towns of Kananaskis and Canmore and Banff National Park. The Rockies extend north of Banff to Lake Louise and Jasper, and south and west of Banff to British Columbia, including several other national parks.

£$€¥ There is an admission fee to enter the national parks by car; the price of bus tours from Calgary varies depending on the length of the tour.